See that picture up there?

Scariest moment of my life, and that’s coming from a guy who nearly burned down the boathouse he was sleeping in one Fourth of July. Quick Tip: any firework that belches flame with the wrath of the sun for five minutes warrants equal minutes of hosedown after. Don’t skimp on the water, friends.

What I’m trying to say is this: I don’t like being on that side of the camera. I’m still haunted by the memory of the photographer, stalking about his studio, Nikon in-hand, commanding me to sit up straight and get confident! I found myself wanting to inquire if he had a stunt double on call. (As you may have heard, we writers tend toward introversion.)

I survived the encounter, and I’m told I look writerly―by a few people at least. So here I am, doing the online-presence thing, trying to carve out my slice of the internet. Modern publishing requires I do this. It’s a ghastly affair, so I’ll spare the details and get to the point: I wrote a novel called Freelight.

It was born of a daydream some years back, during what was no doubt time I should have been focused on work. The idea took the form of a young man encountering a red ghost, leaving me with the burning question:

Why the hell was that ghost red?

From there, the floodgates burst. I found myself scribbling away on page after page of my journal in what was a lunch period of treasonous duration. But the questions kept coming:

If a ghost is red, what other colors do they come in, and what do those colors mean? Who was that young man? Why did he never see the red ghost again?  Most importantly, why did it leave this vision in his head:

The last question is the one that’s driven Jordan Wakefield mad. He’s the hero of the story, a struggling artist trying to find the girl in his head. His need to answer that question sets him on a collision course with a ghost city called Arbor Florum… and the moment Jordan sets foot in that world, they’ll never let him out alive. 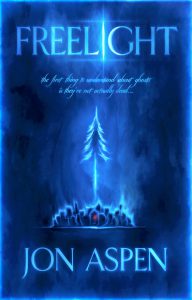